Remodel a Bathroom for Less Than $1000

I decided on one Sunday after Christmas that it was time to sell my house. Sometimes big decisions just happen that way. I have ten years of projects that I have put off, including the bath off the master bedroom and family room. I knew I needed to remodel it for the house to have any chance of selling. What I didn't know was what theme I was going to use. I don't think in decorating terms. The main bath turned into the 'white' bath remodel. I wanted this to be bolder with some contrasting colors. After a lot of thought, I decided on a dark brown ceiling, wallpaper, tile floor and oil rubbed plumbing fixtures.

It always seems to happen. I start with a remodel project plan in my head and somewhere during the remodel the plan changes. One of the items in the plan looks out of place and old once the new items go in. Case in point - during my bathroom remodel I realized that the old fashioned white toilet that I planned to reinstall would degrade the overall look that I was trying to create. Not only would it look out of place, it just wasn't up to snuff with the quality pieces that were going in. Being on a budget I decided to look for a used tan or beige toilet from the Habitat for Humanity Habistore. That meant waiting for one to come in, but sometimes that is the price you have to pay when trying to save money.

The bathroom project has been broken down into the pages below. Click on the topic that you are interested in or use the navigation bar on the footer of each page to move to the next topic:


I don't claim to be an expert in remodeling a bathroom. This is my fourth bath remodel and I have learned quite a bit some of which I will share with you. I am patient and take a lot of time to plan the work, purchase the materials and extra care and time when doing the actual work. This is perhaps the best advice I can pass on to you if this is your first remodel. Plan carefully in advance and take your time.

I have undoubtedly overlooked the obvious in some of my explanations. If you have questions or need further information, feel free to email me. 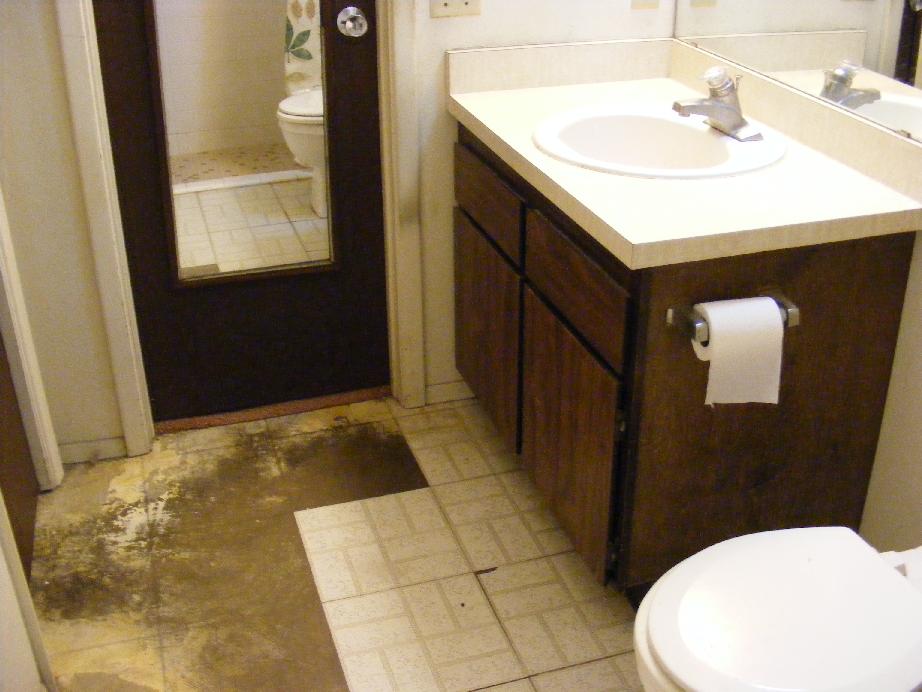 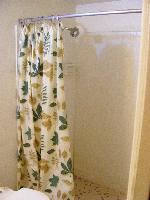 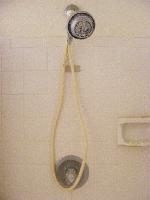 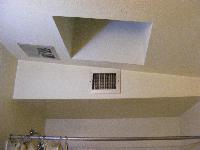 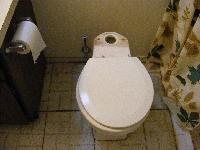 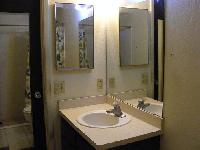 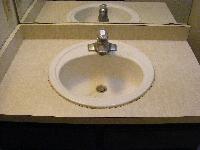 The medicine cabinet was secured with screws and easily removed.

The vanity light was secured with screws to the electrical fixture. First I turned off the power to the vanity light fixture. I then removed the glass fixture and light bulbs. The metal vanity bar was loosened by removing the two screws holding it to the electrical box. I disconnected the two power wires and one ground wire and marked them even though it was fairly obvious which wire went where.

The old vinyl tile was removed. It did not have the ugly black adhesive and were easily removed by sliding a putty knife under the edge of the tile.

The toilet was a problem. The bolts holding down the toilet to the floor were badly corroded and rusted. I used my handy angle grinder to grind the nuts off the bolts. The toilet could then come free and the rusted bolts removed from the toilet ring. Warning! ALWAYS use eye protection when using an angle grinder. Full face protection with a clear shield is best. Be careful not to touch the toilet with the grinding wheel.

The ceiling fan was removed, cleaned and re-oiled. It wasn't working when I removed it. It had to be taken apart to properly clean and re-oil it. When done, the fan worked once more.

The register was dirty and corroded. I had to remove it, sand down the surface and replace the wires that were used in the register to hold the vanes in place. I removed the center copper wire in some coaxial cable I had for this.

The towel bars and toilet roll holder were easily removed by removing the four screws holding them in place. I set the towel bars aside in case I wanted to use them again. It wasn't too long into the project that I decided that they were not properly 'accessorized' for the new oil-rubbed bronze theme.

The old shower curtain and bar came down.

The light switch and electrical outlet faceplates came off, cleaned and the old paint removed. Yes, someone had painted the bathroom without even taking the time to remove them.

The door came off and all of its hardware was removed from the door trim.

The shower head and handle faceplate were removed.

Finally, the mirror was removed which can be a project itself. I discuss this further on the Mirror Removal and Replacement page.

As you can see, the demolition part of the remodel project included a lot of items that I could reuse. The vanity, register, faceplates, mirror, door and ceiling fan could all be reworked and reused. The old vanity light, towel bar, toilet roll holder and toilet went to the Habistore for resale. The wax ring on the toilet was removed and I spent a lot of time removing the remaining old wax and calcium deposits in both the tank and bowel. I even included a new toilet kit and bolts with the toilet. I really like the concept of the Habistore. Old fixtures can be cleaned, reworked, repaired and recycled to give quite a few more years of service.