Intel Matrix RAID - What is RAID?

RAID (Redundant Array of Inexpensive/Independent Disks), uses a RAID controller to combine the available space of two or more physical drives. This new 'virtual' disk space is called an array in RAID jargon. The virtual disk space can be allocated as one or more volumes. Intel Matrix RAID supports one or two volumes per array. The individual physical drives in the array are called member drives. Member drives can be any physical storage medium supported by the RAID controller. 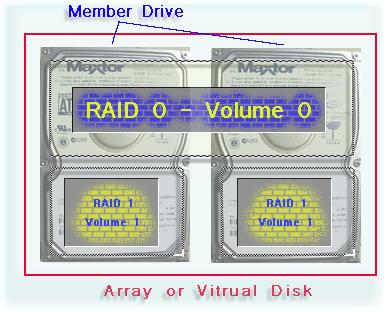 Once one or more RAID volumes have been created and recognized by the operating system (may require special drivers), the RAID volume appears to the OS as any physical disk would in non-RAID mode. The volume can be partitioned into separate logical drives in the OS just as you would with any hard disk drive.

This article assumes that RAID is being implemented on a desktop PC.

RAID is complicated - how it is implemented, how it works and what happens when things go wrong.

Note: RAID is not a data backup solution. RAID is data redundancy but not data backup. Regular backups should be performed to provide an additional copy of your data files.

In order to determine the best RAID options for a desktop computer we need to understand the types of RAID available to the average consumer. There are many flavors or types of RAID:

A good RAID controller hardware based card costs at least $300 USD. This is prohibitive for most desktop applications. That leaves firmware/driver based or software based RAID as our only choices for a desktop RAID solution.

The brand type depends on the chipset utilized on your motherboard. Intel Matrix RAID (394 KB pdf) is the most widely firmware/driver based RAID available today and the RAID solution I will be discussing in this article. Your motherboard might already support firmware/driver RAID. To find out if your Intel based motherboard supports RAID and what features are supported, you need to know the type of I/O Controller Hub (ICH) on the motherboard. You will also need two or more matching drives. If you are using Intel Matrix RAID the hard drives must be SATA drives. Avoid mixing two or more different drives. Performance can suffer and the total space available in the RAID array will be limited by the smallest member drive in the array.

An array can be configured in a number of ways called levels. RAID levels that provide for recovery of data from the loss of one or more drives are called fault tolerant RAID levels. Fault tolerant RAID levels provide data redundancy either by duplicating or mirroring the data on two or more drives or through more complex schemes that use XOR calculations or parity. How you should configure your RAID array depends on what you want to accomplish with your data. There are a number of strategies for data management - maximize performance, maximize available space, maximize data safety or a combination of these.

Widely used RAID levels. Not all of these are suitable for desktop PCs.

Each RAID level has its pros and cons. Because we are discussing RAID on a desktop, the focus will be on RAID 0, RAID 1, RAID 5 and some combinations of those using Intel Matrix RAID. RAID 10 and RAID 01 (not to be confused with Intel Matrix RAID) require four drives making the hardware costs prohibitive for the typical desktop PC.

RAID 0 or striping requires two or more drives. The data is 'striped' or stored across all member drives in the RAID array in blocks or chunks of data called strips. The strip size varies but can be no smaller than the smallest sector size of the member drives and can range from 1 sector to 256 sectors or typically 512 bytes to 128 KB. The strip size is chosen at volume creation and cannot be changed. For a two drive RAID 0 volume two strips make up one stripe.

If there are two drives in the array, the data will be written to both drives beginning with the strip on the first drive. If the available space in the strip can accommodate the data, the data will be written to only one drive. The RAID controller takes advantage of the ability to read and write to both physical drives at the same time. As you might have guessed, this improves the read/write times as compared to a single drive. If you are interested in learning more about how data is stored on a RAID volume, Storage Review.com has some excellent diagrams showing how data is written to a RAID 0 volume, a RAID 1 volume and a RAID 5 volume.

There is a particularly dangerous downside to RAID 0. A single or multiple disk failure will result in the loss of all data on the RAID 0 volume. The very act of using two or more drives increases the likelihood that you will experience a drive failure. For this reason, you should never put any data on a RAID 0 volume that you can't afford to lose. Redundancy? There is no redundancy at all with RAID 0.

RAID 0 is the best choice for maximum performance. Nearly everyone using a desktop PC has important files that they can't afford to lose. For this reason, one RAID 0 volume is not a good idea for the desktop PC. Who then should use a RAID 0 only solution? If you have a good way to reliably back up you important files then RAID 0 could be a good choice. You might be able to make the case that running RAID 0 with a backup solution like Carbonite or Mozy or an external backup drive would make sense. Perhaps, but no backup solution is perfect and there is still a risk of data loss. Gamers could use RAID 0 if they don't mind losing their saved settings and files and if they have no other important information on the PC.

RAID 1 or mirroring like RAID 0 requires two or more drives. The data is 'mirrored' or stored identically on both drives. The RAID controller is able to read from both drives at the same time speeding up read operations. Because the data is replicated on both drives, data must be written twice, once to each drive. There is no speed advantage for writes to a RAID 1 volume. There is in fact a slight reduction in write times to a RAID 1 volume.

RAID 1 is not a good choice for maximum performance. RAID 1 is an excellent choice if you are seeking fault tolerance (the failure of a single drive)

Intel Matrix RAID only supports RAID 1 with member drives in multiples of 2.

RAID 5 or striping with parity requires at least three member drives. Total available volume size is optimized and data redundancy is achieved by using a distributed striped parity scheme. It does so at the cost of slower write speeds.

You will be disappointed with RAID 5 if you are looking for the best RAID performance.

The IMSM console is a GUI that is useful for getting information about the member drives and volumes. The console has two modes, basic and advanced. Switch to the advanced mode to perform tasks related to the RAID array.

When Vista starts and a volume is being verified, Verified and Repaired or Initialized (RAID 5), a notification balloon will pop up notifying you of the volume recovery process.

Maximize the performance of Windows Vista and Intel Matrix RAID